From the Carriage and Wagon works

It has been some time since I have provided a post but works have been continuing.

As the reason for building the Bristol & North Somerset Rly was to transport coal from the Somerset coalfield you can never have enough private owners wagons. The publication of "Private Owner Wagons of Somerset" provides one a list of possible wagon one can build. 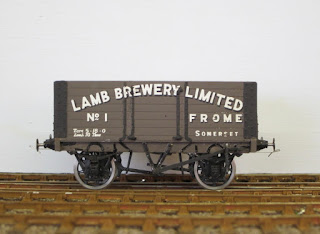 The Lamb Brewery N°1 is a Slaters' standard 7 plank Gloucester wagon with POW sides transfers with an Exactoscale underframe and brake gear. This is believed to have been only wagon the company owned. 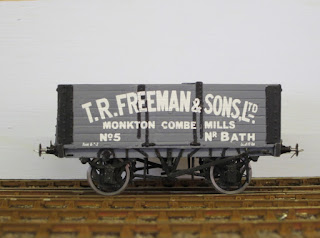 The T.R.Freeman & Sons N°5 is again a Gloucester wagon, but this time a 6½ plank with again POW side transfers and Exactoscale underframe and  brake gear. Apart from the collieries Freeman's were the only company known to have privately owner wagons on the Camerton branch.

Just a quick update. I have finally completed the chimneys for the station building. As see the chimneys on Clarke buildings are ornate so you can see they were made in many parts before being assembled. I have started work on the canopy skylight and have placed it to see what it will look like.

It's been some time since my last post, but things have been started put down when I get stuck and other things picked up. Well as the winter modelling season is upon us I moved from the shed at the bottom of the garden to indoors and so have been doing less messy modelling and I decided that the station building needed to progress - so it time for the windows and doors.

To replace the chassis of this Bachmann Pannier I have again used a High Level chassis kit. However this time instead of building the chassis with the beam compensation system provided I decided to have a go at 'continuous springy beam' (CSB) suspension after reading the article in Scalefour News 182. For more information about CSB's go to "the theory of CSB's".

To allow for the fitting of the CSB's a number of amendments have to be made to the kit. The CSB fulcrum points were drilled using the High Level CSB Jig. The front three frame spacers were modified to allow for the CSB wires to move and CSB carriers were fitted to the bearings.


The hornblocks and frame spacers are fitted using a 'Chassis2'. After fitting the hornblocks/bearings and the frame spacers I made a major departure from the kit's instructions by making up the gearbox, fitting and quartering the wheels. I find that it is easier to setup the loco at this stage rather than when all the valve gear and other bits have been fitted in case it is necessary to adjust the position of any on the hornblocks.

For more information about building a CSB chassis for the Bachmann Pannier go to "Pannier CSB".

Posted by Dave Keeler at 3:51 pm No comments:

In the early photos of Hallatrow there are always lots of milk churns and in 'Through Countryside & Coalfield' it quotes figures for milk traffic over the branch in 1925. For Hallatrow it quotes over 7000 churns. The milk was sent either to London (via Frome) or to Cardiff (via Bristol). All this traffic had gone by the mid-1930 as Express Dairies took over collection direct from the farms by road.
Posted by Dave Keeler at 3:16 pm No comments:

Whilst at Scaleforum 2014 last weekend I took the chance to give my GWR 14xx, an Airfix body with a High Level chassis, a run on the Risborough & District MRC's test track. After a strutting start it completed several laps, in both directions, without stoping. Earlier in the day I had spoken to Andrew Ullyott to see if I could give the loco a run on his 'Wheal Elizabeth' when the show started to run down on the Saturday, as you can see.

I visited the Public Records Office (PRO) to obtain copies of Working Timetables (WTT's) and other documents. However all the sections of the WTT's are bound together and because of the fragility and condition of the pages it is not possible to get good copies of the pages.

I was then told that there were a number of WTT's published on the web and just after that a post was put on a GWR web list asking for WTT's of the branches of the GW main line in Devon in the BR period. The reply gave details of a site with copies of a number of BR(WR) working timetable plus a number of 1911 GWR WTT's. Fortunately this included sections 3, 4 and 5 (i.e. 3 being Reading, Westbury, Taunton & Weymouth, 4 being Bristol and 5 being Weston, Taunton & Exeter). The Bristol section includes both the North Somerset and East Somerset. 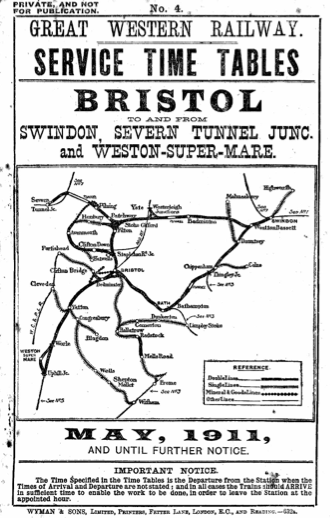 Posted by Dave Keeler at 9:05 am No comments: